Well, I temporarily shut down my old one since I just flinch at the thought of reading about my "mushy" old self.

Anyway. This afternoon, me & mom went to see Jim Carrey's flick "Yes, Man!" in lieu of my former attempt to go to my Alma Mater for the Annual School Fair. 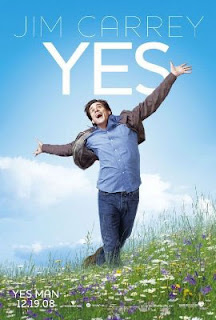 In Yes Man, Carl Allen (played by Jim Carrey) is a guy who signs up for a self-help program in which the idea is to say 'yes' to everything and anything. At first, things are just peachy for our little 'yes man' until he realizes how much of a chore the whole thing really is.

For me, this movie is quite a mellow take on Carrey's comedic prowess. It wasn't the laugh-a-thon type; rather, it gives you an option of what you can actually do with your life. Yeah sure, there are some pretty hilarious moments in the film, but there are times that make you ponder on the plot.

The way I see it - before the self-help program, he was a plain, old, boring guy who hasn't had a single promotion in a loan & savings company that he's been working at for years, add to that his wife having broken up with him in the last 6 months. And yet, just by saying YES to what life has in store for him; it turned his life around - and for good.