Mood: pissy over seemingly dull ailment
I'm still contemplating on what I feel about today --- and words failed me yet again.

I woke up after 14 hours of blissful, and not so blissful, sleep. It was half bad 'coz I obviously overslept, lay on bed with an awful posture and ended up giving myself a nasty stiff neck. Oh the agony!

Then I had to go to school for our choir practice. We rehearsed a new piece re-arranged on piano by our moderator --- Running by Sarah Brightman (click over the title to go to its YouTube video).

It was a nice song, really. Except for the chorus part that I found on YouTube; it was quite overwhelming for me. After 3 1/2 hours of practice, we were sent home (finally) --- but the song wasn't finished yet. So we'll lay it down for another day.

After having a late lunch of my favorite Taiwanese instant noodles and some junkfood, I went online for some drama downloads. A few hours after, I started cursing myself --- I missed to watch Metro Station's live performance at Glorietta!!! Dang. No turning back - it was already 2 hours past. So much for me writing it on my so-called planner.

Good thing the internet's on the rescue once again~! Earlier this day, I watched a morning show and they featured a new trend on fashion that they dubbed the "Boyfriend Jacket". The way I remember it they described it as a loose type of jacket that's really sharp-looking, bordering to semi-formal or smart casual that has the look of a guy's jacket --- sometimes even really guy's apparel --- that women wear nowadays. So I searched some more, and found out that those things are actually a trend even on Hollywood. 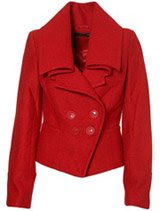 Then as I was flipping through some sites, I asked my mom if she can still find the red jacket that she offered me a few months ago. It was a jacket that my dad bought for her in the US back in the 80s that she never wore... and to my delight, it looked exactly like the jackets I mentioned earlier~!

(Note: Jacket on the inset photo's just a pic I found on the net~!)

So I asked mom if dad still has a lot of clothes that he discarded long ago. Knowing my dad, he has a good eye when it comes to clothing and usually stops wearing them even though they're not that old (i.e. 'coz he's outgrown them... haha). And my mom affirmed it.

In a few days time, I am so messing up with my dad's old stock of clothes. Yes, I fell in love with the trend. No, I don't think that it will ever run out of style. Yes, I love shopping... but to shop for clothes nowadays can be a bit of a drag. So, in short... I hope I can "catch" good finds when I ransack the stuffs later this week before school starts.