Just read this off from today's paper, and thought of sharing it here.
It may not have happened to you yet, but reality is - it MIGHT happen to you, or to your loved ones, one of these days.

Take caution. It's the best way to keep yourself and your loved ones away from vehicular accidents.

********
Reality Bites by Jerry Liao
Texting While Driving Is More Dangerous Than Driving Drunk
Almost always, if you tuned into TV news program or if you ready newspapers, there will be news involving vehicular accidents.

The difference only of the news are the number of casualties, and how the accident transpired. And despite repetitive warnings not to drive when drunk, drivers seems to ignore them and regrets will set in later after they met the unfortunate accident.

Aside from cellular phone use, other distractions that led to vehicle crashes include:
If you think driving while drunk is bad, texting while driving is even worse. Drivers who send text messages while driving are more impaired than those who drive drunk, even at the minimum legal limit for alcohol.

The New York Times recently reported that federal researchers withheld warnings and data about the dangers of driving while on a cell phone to avoid angering Congress.

Researchers with the National Highway Traffic Safety Administration (NHTSA) estimated that cellphone use by drivers caused 955 fatalities and 240,000 accidents over all in 2002. The research was conducted in 2002-2003. 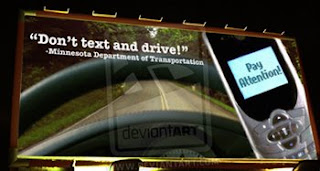 The studies found that:
The rule of thumb here is if you drink, don’t drive; if you drive, do not text. If you don’t care about your life, please consider the life of others. If you really need to answer a phone call or text someone important, park your car for a while.
Posted by Faye Garcia at 8:00 PM