Words of Wisdom Whilst Drunk

From my good friend Toby Peralta (via text):

"It's not the load that breaks you down,
it's the way you carry it."

I ought to post them here, just in case they got 'flushed out' of my wall updates.

I answered: "The day I turned sixteen, and a few months after that. Just to re-do some stupid decisions I made."

Question #2:
SocialInterview.com asked me "What do you wish for this Christmas?"

I answered: "Love, peace, rest and relaxation, and a new iPod (still mourning over the one I lost more than a year ago)."

Question #3:
SocialInterview.com asked me "What do you look for in a partner?"

Good Vibes on a Tuesday 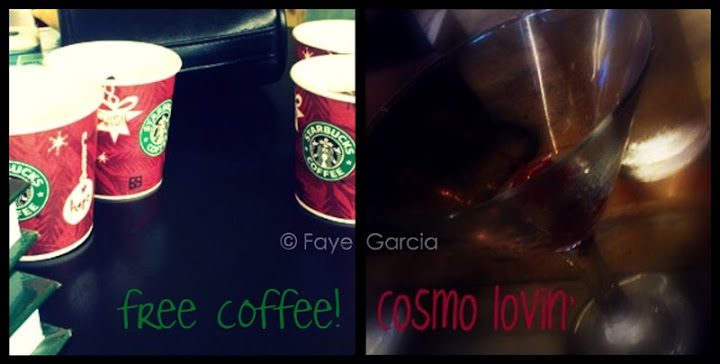 I'm definitely not a morning person, but...
FREE COFFEE!!!
Thanks Telly~

Hooray to my first meal of the day:
Mushroom Linguine + Cosmopolitan

*Stupid Picnik won't edit my photos well. Darn.*
*Picnik finally edited my photos. Picasa is the one being dumb.*
Posted by Faye Garcia at 12:28 AM No comments: 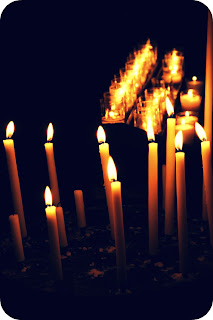 A moment of silence for our dearly departed loved ones.
May they find peace and joy in the Eternal Life.
Amen.

Photo Credit: SanibelRoo of deviantART
Posted by Faye Garcia at 10:23 PM No comments: 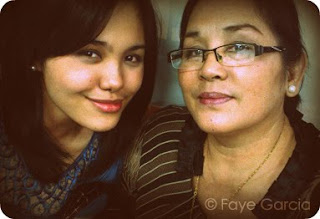 Before I forget, I have to mention my utmost gratitude to my dearest mom who:
I love you mom!
Posted by Faye Garcia at 8:32 PM No comments:

Thesis: Getting the Job Done, for Good

After an exceedingly fun night, the succeeding days were marked with sleepless nights, nonstop typing, excessive thinking, and everything else in between.
Let's just call it by the name THESIS.

'My' thesis is nearing its completion - just a few more revisions, inputting the thesis template, final printing, and book-binding. But the usual happened: I HAD TO line up outside the Research Center for 3 days. To cut things short, I was really grateful of the people whom I've spent time with while patiently waiting for my turn. It's because of them that I knew what I needed to edit in my paper; some new institutional format shit stuff and all. On the contrary, I just hate some people. Thanks, but no thanks.

Finally, a miracle happened. On Wednesday night (the 3rd day that I lined up outside the RC), our Research Coordinator was kind enough to accommodate 6-7 groups at one time. So on Thursday, I just stayed at home and pulled an all-nighter to finish revising the paper for the nth time.

On Friday, after enrolling for my last term in College (yey, thank God!) me and mom went to Vito Cruz to have 'my' thesis binded. After 4 hours of waiting, it's finished! I was so happy that it felt like seeing my baby work for the first time in all its glory. I was extremely fulfilled that it didn't even bother me when me and my mom had to literally chase our adviser from SMX to CCP to have his signature affixed on the approval sheet. 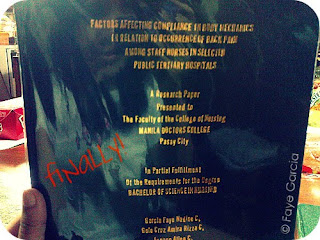 Crazy days. Really. But some good times in between, too!

I really do hope that my batch mates are sharing the same sentiments as I do.
Posted by Faye Garcia at 8:00 PM No comments:

Wow. It took me this long to put up this post.

Anyway, last October 22 was our last day of final exams for 1st term. Uh-huh, I wasn't able to chose not to study despite... whatever. It didn't really matter, I'd only be repeating things I already know if I studied. 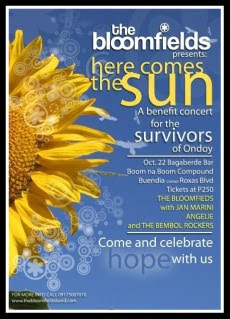 After finishing in second in our last exam, I hurriedly went out of school to meet up with my friend Donna at Mall of Asia for our evening rendezvous. Unexpectedly, a lot of things happened in between making me late (again) for our appointment schedule. So around 6:30pm, I was able to meet up with her and her friends Meg and Andre. We headed to her house for dinner and some rest before we went to Bagaberde in Roxas Blvd. for the benefit concert that she was invited in by Jayjay Lozano (yes, of The Bloomfields).

After some yada-yada, walking, weaving through crazy night traffic and some more walking we arrived at Bagaberde at half past 8pm. The place was good, though a little bit thrown off by the indoor smoking... but it was all good. An hour and a half later, Marie (Donna's school friend) arrived just as the first few songs were being performed by the first band.

I just wanted to have some fun. And fun I DID have.

The sets were really really fun and hyped-up. The band Take Note was the first to perform before The Bloomfields. And that night, despite myself - I became a groupie fan.

We grooved to old school tunes like it's a 70's promenade. And after a few vodkas or so (just 2 bottles, promise), I found myself dragged on the dance floor by Donna.

Good times, seriously. There was even a time that Pepe (Lozano) danced the twist with me. Donna was shocked, so am I! That was a really fun night. Case in point: Jayjay's Uptown Girls (secret na lang 'yon!).

It was too bad though 'coz I have to end the fun at 12:30am. Dad was calling me nonstop. It was really sad that I wasn't able to meet the guys after their set.

Congratulations to The Bloomfields for a very successful benefit concert (and to everyone else involved, this goes out to ya'll!).

Click THIS LINK to view a short article on this event from The Bloomfields' website.
Posted by Faye Garcia at 7:04 PM No comments: