'Coz It's Bigger Than Coffee

Everyone knows that my blood's literally composed of 75% coffee, so it's no wonder that I'm on my 6th year of collecting the Starbucks planner.
This year, I was initially hesitant to collect stickers since I always have a habit of abandoning my planner halfway through the year plus the fact that I need to save up on my upcoming travels for next year. Well, I still update it from time to time but it's very much unlike the first few months that I got it.
Thanks to the help of my wonderful teammates and my bestfriend - I was able to get my planner this year right on target - and at a cheaper cost too! I love you, guys!
So here it goes, I got mine last Saturday (12.10.2011) while me and my boyfriend were hanging out at Starbucks Glorietta 5. This year, my planner redemption came with an unexpected twist.
I was ordering a tall extra hot Hibiscus Tea Latte from the barista and when I told him that I'm also getting my planner at that time, he told me that I could get anything on the selection except the cherry one (it came in five colors: poplar, bamboo, cherry, spruce, and oak). I initially wanted the cherry one since my officemate showed hers and it was the perfect color. But I just opted for poplar. I thought cherry was unavailable, but I got a big laugh when the barista said (well, not the exact words though but just the same thought),

I can't even bat an eyelash when he said that. I found it really funny! This is what usually makes me go to Starbucks. Most of their baristas are very personable, even though they're not your suki branch. 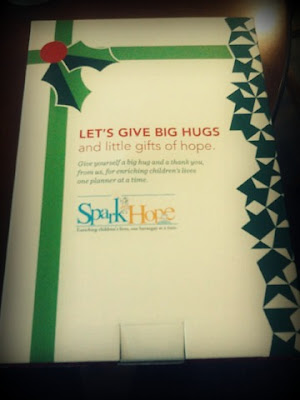 I was happier when I got back to the table. My boyfriend unwrapped the planner first, and when I looked at it - it was SO pretty. I mean, it was just the right size and weight for a planner. Not too bulky, not too flashy but not too plain either. 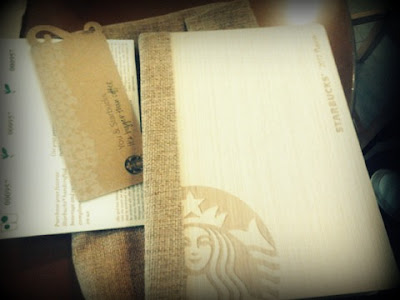 Despite the fact that the previous planners have more writing space on it (and writing lines, too), I like this planner better because I'm pretty sure that I can update it much easier. It also comes with this "notes" section that I appreciate since I plan to stick a lot of photos on it to make it sort of a scrapbook-y planner. The only downside is it's made of wood, so I'd have to be more careful with it.
But waddaheck, I love my planner for this year! Let's see how it ends up looking by the end of 2012. ;)
Posted by Faye Garcia at 10:19 PM