After work on Saturday (12.10.2011), me and Fjordz headed off to Bonifacio Global City for Sun Life Financial's SunPIOLOgy Sunset Run (for the benefit of the Hebreo Foundation). Yes, Papa P was there for the 10K run - don't ask again (lol). Moving forward >>> 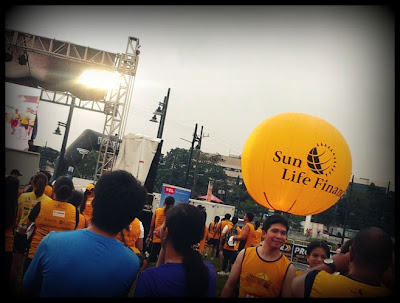 Frankly, it's my first time to join an actual race though I've been running (just for exercise and the sake of losing weight) since early 2010, but I seriously have no idea what to expect. It was his first time, too! So we just tried the 3K race for starters. :)
Knowing that the weather hasn't been the most cooperative one for the past few days, I expected that it might actually rain during the race. Luckily, it didn't! Well, it did but it was just rain showers.
I know for one that the race route we took wasn't the usual one for races held at BGC (from 34th St. to 8th Ave. and back), but I realized that it was a little challenging when I was on my 2nd km at 8th avenue because the road was inclined so the route back up to the front of MC Home Depot was a struggle.
But I think I have to get back on my running shoes to get some practice. I finished at roughly around 24 minutes for a 3 km run - quite slow from my usual time. 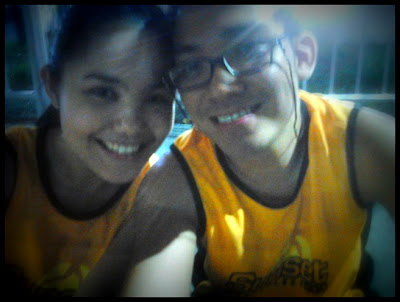 But despite that, I had an awesome time! I'm guessing that the crowd's unlike the ones you usually see at bigger races, but it was still good. The perks after the race wasn't so generous either. It's still the good times that matter. Plus, dinner at my house after the race (in short, nawala din ang tinakbo. Haha!)! :)
Posted by Faye Garcia at 2:00 PM